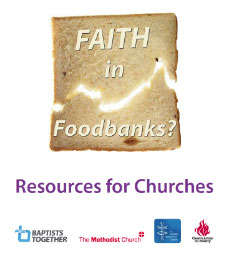 The Baptist Union of Great Britain, the Methodist Church, the United Reformed Church and Church Action on Poverty have produced a three-part resource for churches about the growing food poverty crisis.

“Faith in Foodbanks?” recognises the ministry of many churches helping people who cannot afford to eat, looks at why there has been such a growth in foodbanks, and suggests ways churches can take action to tackle the underlying causes. It offers worship and bible resources to help Christians to reflect on food and poverty in Britain today.

In the last five years the need for foodbanks in the UK has grown dramatically. Thousands of Churches have responded by starting or supporting foodbanks within their communities. Last year Trussell Trust, which helps 4 in 10 of the UK’s foodbanks, fed over 900,000 people including more than 300,000 children. The entire foodbank movement will now feed well over a million people a year.

‘We need to be asking why this is happening,’ said the Revd Dr Chris Ellis, President of the Baptist Union of Great Britain, ‘The stories and reflections in the ‘Faith in Foodbanks?’ resources challenge us to question the injustices of systems of power that allow individuals and families to go without food.

‘The Bible calls us to put our faith into action.  Churches involved with foodbanks and asking the deeper questions about food poverty are doing just that.’

The Revd Dr Michael Jagessar, Moderator of the General Assembly of the URC added, ‘The truth is the church should not have to have faith in foodbanks – but they are a sign of the times – a sign that the world is not as the God of justice intends it to be, a sign that the church will respond to poverty by taking practical measures to help those who are most in need, but also a sign that we need to ask deeper questions about the causes of poverty and inequality in our country.’

‘The rising cost of essentials such as food, fuel and housing coinciding with static low incomes, people not being able to find enough work and continued austerity measures, has left many families with no alternative but to turn to foodbanks for help.’

13 million people live in poverty in the UK today. This includes 3.5 million children – a number that is set to rise to 4.6 million by the end of the decade. Families that need foodbanks represent the sharp end of poverty and the best evidence says they are driven there by benefit delays or changes along with low income and high living costs.

The Revd Ruth Gee, President of the Methodist Conference, added, ‘Why are new foodbanks opening across the country every few days when this is one of the wealthiest nations in the world? When we hear stories about the increasing need for foodbanks, we are bound to respond and to obey Jesus’ command to love our neighbour – supporting foodbanks is one way of doing this. We also need to recognise that the need will continue to increase unless we tackle the underlying causes of food poverty.’

“Faith in Foodbanks?” is a three-part resource including an outline of the facts and fiction surrounding foodbanks, along with worship materials, reflections, prayers and action points and six Bible studies that explore the ministry of foodbanks and what God’s Word might teach us about them. The resource is now available to download.

Article taken from The Baptist Times